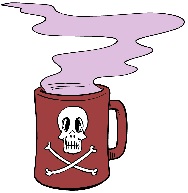 Okay, I want to catch you before it gets close to New Year’s and you resolve to go out and buy lemon juice, cayenne pepper, or a bottle of Master Colon Wash, or worse, pay someone at a spa to starve and torture you.  There is NO evidence that any detox diet does a better job of cleaning out your body than it’s already doing.  Zero.  Zip.  Nada.  No doctor will suggest you starve and then gulp down laxatives, unless you’re having a medical exam.  I was a little alarmed when I saw that “Doctor Oz” was touting a “detox diet,” but it turns out that his idea of a detox diet is to stop eating potato chips and fast food, and start eating more broccoli.  I’m okay with that.

And colonics.  The mind reels.  I recently reached that age where my doctor suggested that I experience the joy and wonder of my first colonoscopy.  I dutifully got my enormous bucket of GoLikeMad (just add water, sugar-free lemonade, and a clear path to the nearest toilet), and I promise you, there was less than nothing left in my colon after that (and scarily enough, I have the pictures to prove it).  I’m happy to say that my innards are free of suspicious bits, and even happier to say that means I don’t have to have another colonoscopy for ten years.  It boggles my mind that healthy people pay to have this done to them, just because they feel a little bloaty.  You’d have to pay me to go through that again without a good reason.  And I’m talking diamonds and convertibles kind of pay.

The Ins and Outs of Environmental Toxins

First off, the world is not nearly as full of toxins as doomsayers would have you believe.  Don’t get me wrong, there are some scary things out there, but your skin keeps out most bad stuff, so we only have to worry about the stuff that we purposefully ingest.  And yippy skippy, our fabulous bodies generally know how to deal.  I grew up in the Los Angeles basin, and during the summer I practically lived in my swimming pool.  Between breathing the smog, and inhaling enough chlorine fumes to prompt an EPA investigation, I could barely draw breath by the end of the afternoon, and it hurt like crazy.  Yet somehow, when I woke up in the morning, my lungs were clear and happy, and out I went to spend another carefree day filling them with poison.  (And my lung function is fine, thanks for asking.)

Unless you live someplace like Bangladesh, where they’re currently having an arsenic crisis, your water is likely clean.  I drink mostly bottled water for taste reasons, not because I think my tap water is dangerous.  Ditto your food supply.  For the sheer volume of food produced and consumed in this country, disease outbreaks and recalls of tainted food are extremely rare.  If you are concerned with food safety, the time to do something about it is before it goes into your mouth.  Patronize local farmers’ markets and stores that carry local produce.  Carefully wash produce before eating it.  It’s better to put good stuff in than try to torture yourself thinking you can get bad stuff out faster.  At some point in your life, you probably will ingest something harmful, but if, like me, you’ve ever had food poisoning, you know how good your body is at getting rid of something it has determined is bad for you.

You are detoxing, 24/7.  Your circulatory system, working with your liver, kidneys, and GI tract, are hard at work, waking or sleeping, regulating everything your body needs and jettisoning everything it doesn’t.  Some things don’t wash out very easily, so your body locks them away in your liver in places so inaccessible it would put that warehouse with the Ark of the Covenant to shame, or “dead” tissue like your hair and fingernails (hence the whole “bald Britney” episode).  If any of the so-called “liver cleanse” programs or products actually could force your liver to give up everything it had tucked away, it would probably kill you.  Even the beneficial things stored in the liver, like Vitamin A, are toxic when taken too much at a time.  If you’ve truly been exposed to something that needs to be forcibly removed from your body, it will probably require chelation or plasmapheresis, in a hospital, surrounded by doctors.  Spicy lemonade will not cut it.

Drinking water is good for you, but too much, even of water, will damage or kill you.  Too little iron?  Anemia.  Too much? Iron poisoning.  Too little food?  Starvation.  Too much?  Obesity-related illness.  Most things we put in our bodies are needed in particular amounts, and too much or too little is a problem.  Happily, our bodies have been forged in the fire of plagues, famines, unsanitary conditions, and outright stupidity to the point that you really have to work at damaging your body beyond its ability to heal.  The species would have been gone a long time ago if we couldn’t tolerate eating stuff that is not exactly optimally healthy.  Or even food.  Ask the mother of a small child how much dirt her kid has eaten.

So if you’re feeling like your engine isn’t running on all cylinders, here’s what you do.  Drink a glass of water, eat a salad, and walk around the block.  Resolve for a week to eat nothing from a fast food place and to get 8 hours of sleep every night.  If you’re really determined, avoid alcohol and caffeine for the week.  By the end of it, you will be every bit as cleansed as you would have been on a detox diet, and you won’t have a sore throat, a chapped backside, or a vitamin deficiency.  You might feel so good that you’ll make it a habit.