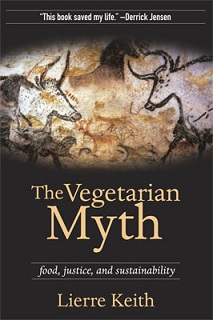 This is another review that I’m going to start with the conclusion:  BUY this book.  And however much you love your Kindle or other ebook device, buy the physical book.  This is a book you’re going to want to dog-ear, highlight, and annotate.  The Vegetarian Myth by Lierre Keith is one of those books, like Rachel Carson’s Silent Spring, that people will be pointing to decades down the road as a readable wake-up call regarding a problem that many people don’t know we have.

The first reason you’re going to want this book is in case you have, as a former neighbor of mine did, a teenaged daughter who comes home from school one day and announces that she is a vegetarian.  This will most likely be because she has decided that animals have feelings and “meat is murder.”  It is also likely that to her, “vegetarian” means she’s going to live on Coke and french fries, which will demonstrate how well thought out her new position is.  (Okay, it might be your son, but statistically speaking, it’s more likely to be your daughter.)  The first thing you should do is call the school, because it’s very likely that a teacher or teacher’s aide has been proselytizing to her, and the school needs to know (and put a stop to it).  The second thing you should do is send her to the next-door neighbor who has enough knowledge in physiology, animal husbandry, and agribusiness to refute her claims in painful detail.  No?  Then give her this book and let Lierre Keith do it.  Keith has the added bonus of street cred, because she was a practicing vegan for almost 20 years until it nearly killed her.  I never drank that Kool-Aid.  Keith is also a radical feminist lesbian with pagan leanings, so if any of that will make your head blow off, be warned.  I did feel the occasional urge the stand up and defend my husband and other good men from Keith’s wholesale condemnation of the masculine gender, but thankfully, those bits are few enough and far enough between not to ruin the book.

English philosopher Gilbert Ryle wrote, “To explode a myth is… not to deny the facts but to re-allocate them.”  One of the reasons Keith’s arguments are so persuasive is that she repeatedly validates the goals and motivations of vegetarians, while demonstrating that their actions are wrong because they don’t have enough information.  Since Keith acquired the information through a long process of personal enlightenment, she is able to deliver it in a way that embraces the cause while rejecting the conclusions.  It’s a much easier pill to swallow than an eye-rolling dismissal by those of us who got the information earlier and more easily.  And Keith details her well-meaning struggle so beautifully that I had to laugh at episodes like her slug catch-and-release program while still thinking she was nuts.  And I truly didn’t think there was anybody crazier than fruitarians.  Breatharians?  Are you kidding me?  Did you all fail biology?  (My husband points out that a group that advocates not eating is much like the Shakers, a group that forbids sex, in that it is a problem which will resolve itself in the fullness of time.)

Keith’s arguments are organized based on the three oft-touted rationales for vegetarianism, Moral Vegetarianism (“meat is murder”), Political Vegetarianism (“meat is an inefficient and unfair use of global resources by massive corporations”), and Nutritional Vegetarianism (“meat is unhealthy”).  She acknowledges where each group has the right idea, and then demonstrates where they’ve gone wrong.  Agriculture kills more animals than slaughterhouses. Plants can’t make food without dead animal parts.  Monocrops like corn and soy have done more damage to third-world economies than oppressive regimes and natural disasters combined, and many well-known “organic” food brands are owned by chemical companies.  And sorry, but our bodies need things (certain vitamins and amino acids) they can only get from eating animal products.  Go omnivore or go home, in a box.

The Politics of Corn

The thing about the book that reminds me of Silent Spring is that it unabashedly attacks monocrop politics in the same way that Rachel Carson attacked pesticides.  I annually drive across the country to visit family and friends, and the miles of corn and soy that I pass make me cringe.  And the corn isn’t even the kind people want to eat (sweet corn, popcorn), it’s the kind that will be processed into meal, animal feed, and corn syrup (dent corn).  This corn is heavily subsidized by your tax dollars, and that keeps it so cheap that it literally sells for less than it costs to grow.  That in turn keeps the cost of every product that uses corn syrup artificially low, as well as the cost of every animal product that the corn gets fed to.  It’s a scary and uncomfortable chapter, though happily the shortest.

Keith accepts the same sad fact that Rachel Carson accepted– high yields of cereal grains farmed with petroleum fertilizer are keeping a huge chunk of the population from starving to death, just as higher yields of crops sprayed with DDT did before it was banned.  It’s incredibly hard to tell millions of people that they can only stay alive by inflicting enormous damage on the environment.  But poisons will build up and fossil fuels will run out.  It’s a pyramid scheme of cereal grain.  My father spent most of his working life as a petroleum geologist, and I can tell you that the oil industry knows exactly how finite the supply of fossil fuel is, and because they don’t want to cease to exist, they are actually working really hard to develop other fuel sources.  I’m not sure the same is true of the petroleum-based fertilizer industry.  Currently, the bulk of the criticism against Keith’s book is from angry vegetarians who think she’s lying because she got sick and wants to blame them.  If Monsanto starts a smear campaign, as they did with Rachel Carson, Keith will know she has really arrived.

I was that 7-year-old girl weeping through Mutual of Omaha’s “Wild Kingdom” wondering why the camera crew didn’t stop the mean lion, hyena, (insert your favorite predator here), etc. from killing the poor zebra.

Cream Puffs of the World, Unite!

The Moral chapter touched me especially, because as the saying goes, “There but for Fortune…”  I am a cream puff (crunchy outside, gooey center).  I was that 7-year-old girl weeping through Mutual of Omaha’s “Wild Kingdom” wondering why the camera crew didn’t stop the mean lion, hyena, (insert your favorite predator here), etc. from killing the poor zebra.  No later shots of adorable cubs gnawing on zebra parts could assuage the horror of the kill.  Had I not been raised by a scientist father who encouraged my critical thinking and a dietitian mother who came from a rural background, I probably would have given up meat, too.  My mother often told me that when she was a child and her father brought home a batch of chicks, the chicks were divided among the five children, who had the responsibility for feeding them.  Since my mother was a cream puff who snuck extra treats to her chicks, they got fat first.  She wept and went hungry through many a Sunday dinner, despite my grandmother’s attempts to insist that this piece of chicken came from somebody else’s bird.  Her grief was acknowledged, but not to the point where birds meant for the family to live on became pets.

I did not complete my education to become a veterinarian, because once I started working in an animal hospital I learned a painful truth.  I could be a veterinarian OR I could have a life, but not both.  If there was an animal that was critically ill, I couldn’t bear the thought of locking up the hospital, going home, and leaving that animal to die alone in a cage.  So I sat with it, sometimes for hours.  I exhausted myself, and I have no idea whether I brought the dying animal any comfort or not (a lot of animals crawl off to die by themselves on purpose).  I actually cared too much to be effective at my job.  Care costs, and often what it costs is reason.  So I switched to accounting, because I’ve never wept over a balance sheet, no matter how bad it looked.

To this day, I feed anything cute and fuzzy.  I admit to being terribly species-ist, though.  I feed squirrels, but rejoice when my cat kills a rat.  I avoid pesticides as much as I can, but I will not cohabit with wasps, mosquitoes, or fire ants.  Spiders and other ant varieties can stay as long as they’re content to live outside.  If they come in my house, they’re toast.  And I’m a dedicated carnivore.  I have seen humane slaughter facilities; we should all go so quickly and painlessly.  I believe that animals we are going to ask for the ultimate sacrifice deserve to be husbanded, given a good life and a swift and skillful death.  And I know that often, especially in the conglomerate agribusiness of today, that doesn’t happen.  (Cows do fairly well, because their meat changes color when they get scared.  Not birds.  If the idea of animal cruelty worries you, do not eat major-producer poultry.)

I grew up Catholic, and on Ash Wednesday, the priest marks your head with ash and says, “Remember, man, that you are dust, and unto dust you shall return.”  It’s more than a little scary, but maybe it would have saved Lierre Keith years of torment.  Because her ultimate epiphany that led her back to sanity was that everything dies.  And everything lives because something else died.  The zebra eats the grass, the lion eats the zebra, the lion dies and rots into the ground, ultimately feeding the grass.  We can’t digest cellulose, so we need to eat something that can.  That makes us lions, not zebras, but we’re still going to be grass one day.  And the soil bacteria will receive us as happily as we receive that prime rib.

Sadly, we are locked in a room where every exit has explosives wired to it.  Require naturally sustainable crop production?  End government subsidies? Food costs will skyrocket.  Save the planet, watch people starve.  Require all biological waste to be reintegrated into the soil?  Oh, the smell.  I went to an Ag school, and between the dairy barn, the horse barn, the pig barn, etc., you had to get used to bad smells or transfer.  But most people won’t sign on for living next to fresh animal waste.  They don’t even like it when their gardener spreads nice, clean processed manure on their lawn.  Grow only grass-fed beef and dairy, and free-range omnivorous poultry?  Again with those skyrocketing food costs.  Require food to be grown within 1000 miles of where it is consumed?  I’m good with that, because I live in Texas.  There isn’t much I want to eat that can’t grow or live here.  But a lot of the country, a lot of the world, is going to be hungry.  And angry.

I hate to adopt an “après moi, le déluge” attitude, but the cold fact is that the crisis won’t come in my lifetime.  And I’m not prepared either to volunteer to die, or to tell someone else they have to starve because cereal grains are killing the planet.  I’m also enough of an optimist to believe that there are solutions to be found to accelerate topsoil regrowth, given dedicated scientific minds and political will.  I guess the politicians just aren’t scared enough.  Yet.  Maybe I should mail out a few copies of the book to my congressmen.