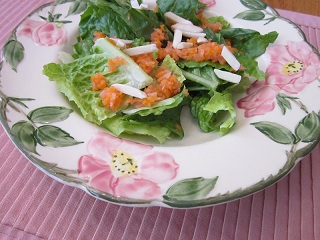 Thanks to my husband’s Air Force career, we have lived all over.  I was sadder to leave some places than others, but in most spots there was a treasure I wished I could pack up and take with me.  I guess it says something about my priorities that those treasures were usually restaurants.

In Columbia, South Carolina, we enjoyed many a meal at a Japanese restaurant called Micato.  (Since my husband refuses to eat sushi, it was a fine thing that Micato makes delicious curry dishes as well.)  They had the most amazing and flavorful dressing on their salads, and after a little serious taste-testing (that’s my story, and I’m stickin’ to it) and some experimentation, I figured out how simple and how incredibly low-calorie it was.  It also makes a yummy topping on fish.

In your food processor, put 1 ounce of gari (asian pickled ginger root, the thin-sliced pink stuff) and 1-2 ounces of carrots.  Process, and while the machine is running, drizzle in 1 tablespoon of light-style (no added sugar) rice vinegar until the dressing comes together.  (Micato’s dressing is actually just gari and carrot, but I find the addition of the vinegar spreads the flavor through a tossed salad better.)

If you want to add even more zing, process in a few slivers of jalapeño or serrano chilies, for another jolt of flavor in return for barely a trace of carbs and calories.  If you want the dressing sweeter and you can handle a few more carbs and calories, add a tablespoon of mirin (japanese rice wine).  It’s a delicious addition, but a tablespoon will cost you 35 calories and 7 grams of carbs, still not bad split between three or four salads.  Enjoy!