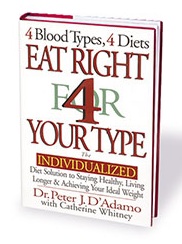 A friend recommended Peter D’Adamo’s Eat Right 4 Your Type, and having now looked into it, I’ve got to wonder if she’d had her coffee before she read it.  Because total lack of brain function is the only excuse I can see for regarding this book as anything but complete and total hooey.  Was that harsh?  Gosh, and my blood type is supposed to make me so empathetic.

My first reaction was to wonder how a physician could be this irresponsible, but D’Adamo, it turns out, is not a physician.  He’s a “Doctor of Naturopathy” which means he’s completed roughly the course work required of a Physician Assistant (and PAs very carefully do NOT let themselves be called “doctor”), plus those important extra courses like herbal remedies, sorry, botanical medicine.  (Sorry to those of you who love your herbal supplements, but any plants that contain medicinal compounds with real efficacy are too dangerous not to be processed and measured to such an extant that you might as well have taken the pill in the first place.)

What I honestly expected to find in this book was something akin to that one-size-fits-all personality profile from the psychology experiment.  You know, where everybody gets the same profile, saying things like, “You enjoy being around people, but sometimes would rather be by yourself,” and “You don’t think you’ve really achieved your full potential,” that are true of most people.  Then the participants are asked to rate the accuracy of their profile, and of course most rate it as very accurate, proving either that people are very much alike, they are very gullible, or there is too much money available to fund psychology experiments (and perhaps all three).  I expected to find very similar suggestions for all types.  If that were the case, this book would be much less dangerous.

Unfortunately, D’Adamo bases his entire premise on incorrect information, namely, that type O is the oldest blood type.  He relied on research done in the 1950s and did not take into account current (and this is current as of 1990; D’Adamo published in 1996) conclusions that A is the oldest blood type, followed by B, then O.  D’Adamo basically characterizes type O as a hunter-gatherer, type A as a farmer, and type B as a herder, claiming that the blood groups diverged at the same time as human populations settled down to raise crops or migrated to open grasslands with their flocks.  Sadly, this is, and I’m using a scientific term here, poppycock.  The ABO blood types diverged millions of years ago, sometime between the time we decided to walk upright and the time we could call ourselves something reasonably human.  And it has nothing to do with migration or agriculture, because the same blood groups are found in most primate populations.  (Gorillas do not farm, and chimps that live more than a few miles from where they were born were forcibly moved.)

According to D’Adamo, those caveman type-Os should be eating the hunter-gatherer diet (and yes, the Paleo Diet is on my radar, watch for it!), the meek vegetarian type-As should be eating grains, and the steppes-dwelling type-Bs should be eating meat and dairy.  Um.  If you overlay some medical info over the map of blood type distribution, you’ll see that diabetes tend to be prevalent in the same places a lot of type-As live.  Type B is prevalent in Asia; know what else is prevalent in Asia?  Lactose intolerance.  So by the time the type-As are finished injecting their insulin and the type-Bs are doubled over from abdominal cramps, the aggressive type-Os are going to take over, regardless of what they’re eating.

You Are What You Bleed?

Meek?  Aggressive?  Oh yeah, D’Adamo also believes our blood type is an indicator of our personality.  He says that only type-Os are equipped to handle leadership positions.  Type-Bs are flexible but wishy-washy, and type-As should just give up now.  He actually recommends that type-As avoid crowds and loud noises.  I’d call him a typist, but that actually implies some usefulness, though given the death of typewriters and the replacement of “typing” with “word processing” I suppose the word typist is likely available to apply to someone who unfairly discriminates based on type.  Sadly, D’Adamo is not alone in his typist beliefs; many cultures have as much faith in your blood type’s ability to affect your destiny as the astrological sign under which you were born.  Recently (July, 2011),  Japanese reconstruction minister Ryu Matsumoto issued a statement blaming his blood type for some rash words that forced him to resign.  Well, it’s a novel spin on “the Devil made me do it.”

One of the basic tenets of naturopathy is to avoid overeating, and I’m on board with that.  Unfortunately, that tenet is followed closely by “eliminate alcohol and caffeine.”  (So sorry, but thanks for playing our game.)  We were all cavemen together, but since then we’ve not only had thousands of years for our bodies to adjust to new climates and foods, but many of us are fortunate enough to be prosperous enough to eat things that aren’t good for us.  And as long as we don’t do it all the time, our highly-evolved digestive systems will roll with the punches, regardless of our blood type.  So, unless you want to read the book for laughs, or you’re looking for an excuse for your next bone-headed moment,  just leave this one on the shelf.  Or do everybody a favor and move it to the fiction section where it belongs.