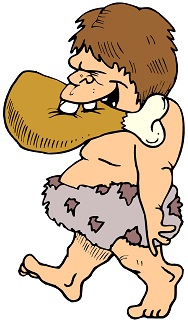 From the time some long-ago humanlike ancestor decided it would be cool to walk upright, all the way up to today, the leading cause of death has been starvation.  (Horribly, in some parts of the world, it still is.)  Wars and pandemics can’t begin to match starvation’s body count.  So what’s a Mother Nature to do to protect her children?  Easy.  Teach them to eat it when they see it, and encourage them to like to eat things that will most efficiently pack on the pounds.

There is a reason we’d rather have a chocolate chip cookie than a carrot stick.  We have 20,000 years of evolution behind us, in which people with a taste for sweet, high fat, high calorie foods survived the lean and hungry times better than the carrot-stick lovers, and managed to reproduce and bring offspring to maturity, insuring that their genes were passed on.  We are hard-wired to eat this way.

As soon as we can get around under our own steam, we start putting things in our mouths, hoping for a good result.  And our tastes are evident pretty early.  Any mother of a young child will tell you that there were some foods that came back out of the mouth as soon as they were spooned in.  For my son, every one was a vegetable (but not all vegetables– high sugar vegetables like sweet potatoes and yes, even that poor carrot were cheerfully accepted).  But oh, the day when that first french fry or bite of pizza comes your way.  Carrots don’t stand a chance.

Food undeniably impacts our brain chemistry.  Take a hard look at most people’s idea of “comfort food” and it will be high fat, high carb, or both.  Macaroni and cheese, mashed potatoes and gravy (heck, anything and gravy), bacon sandwiches… okay, I’m making myself hungry now.  But we don’t crave these foods just because we remember Mom making them for us, we crave them because our brains tell us that these foods make us happy, no matter how bad our day has been, and no matter the number on that nasty bathroom scale.  It’s not a character flaw; it’s Mom Nature trying to put a winter coat on us that will see us through the frost.

Unfortunately, now that most of us in the developed world don’t have to worry about getting through the winter, Mother Nature is out of options.  The engine of evolution can’t help us reset our tastes this time.  Even though we are starting to see the first declines in life expectancy in recorded history, primarily due to obesity issues, people simply aren’t dying early enough to effect a change in our ways.  People who die from obesity-related health issues rarely die before they have had a chance to reproduce and pass on their fat-loving genes to their children.

The good news is, that same 20,000 years of evolution has given us an impressive higher brain function.  It drives people to study what high-fat and high-starch diets do to our long-term health, even if it won’t kill us before we reproduce.  Most importantly, it lets us control how much of that yummy almost-irresistible fatty stuff we take in.  I said almost.  We can resist, we just don’t like to.  And we don’t have to, at least not all the time.  Chocolate chip cookies aren’t poison.  If you have to drown your brussel sprouts in butter or Hollandaise sauce to find them palatable, you might as well have a chocolate chip cookie.  Just remember you might want to take that winter coat off come the spring.