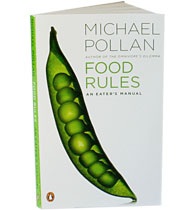 In Food Rules: An Eater’s Manual (Penguin Press, paperback edition January 2010, illustrated edition November 2011), Michael Pollan hopes to supply you with a back-to-basics food guide that you can read in 20 minutes, pore over and consider for hours, and then carry with you to restaurants and grocery stores to inform your every food-purchasing decision.  Kind of like Mao’s “Little Red Book,” only for food instead of Communism.  Sadly, he then put out a hardcover edition (illustrated by Maira Kalman) that costs twice as much and isn’t nearly so portable.

A lot of the rules will make you laugh, and hopefully think.  I love “Eat only food that will eventually rot.”  I have noticed that many bread products seem to have suspiciously long shelf lives.  When you have a nice fresh baked baguette that starts growing mold about Day 3 and a loaf of generic wheat sandwich bread that is four days older and looks perfect, be very afraid.

Other rules seem sensible until another rule contradicts it.  “Don’t eat anything your great-grandmother wouldn’t recognize as food” is pretty clear, but then you get “Eat like the Japanese.”  I promise, my great-grandmother would have taken one look at tofu and used it as furniture polish.  (And “Avoid foods that are pretending to be something they are not.”  Tofurkey, anyone?)   Also, “Treat meat as a flavoring or special occasion food.”  If you sat my great-grandmother down to a table full of platters of grains and vegetables, she’d ask if the roast was still in the oven.

Rules Meant to be Broken

Then there are rules that simply make me question Mr. Pollan’s personal experience.  “Avoid foods that contain more than five ingredients.”  Really?  You don’t make a lot of soup, do you?  Darned few of my favorite recipes contain fewer than five ingredients.  As long as those ingredients are in themselves “food” by Mr. Pollan’s definition, I can’t see that taking them together as a group should be a problem.  Oh, and “It’s not food if it arrived through the window of your car.”  I have an awesome whole foods restaurant near my house, and they have curbside takeaway.  I get it, he doesn’t like fast food, and neither do I, but a few of the rules seem to be more generalized than what I’m sure he’d like to say, which is “Don’t eat at McDonald’s.” 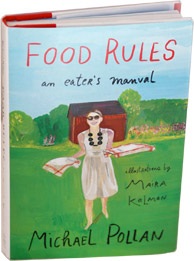 One of the most shocking rules to me is “Eat all the junk food you want as long as you cook it yourself.”  Happily, I know how to cook and I enjoy it, so this would give me carte blanche to weigh 300 pounds in no time.  I don’t deep fry stuff very often, not because it’s a big deal, but because I know it’s bad for me (and I hate to waste that much oil, because I will NOT store and reuse it). This rule will certainly achieve Mr. Pollan’s goal of weaning you off processed food, because once you’ve tasted home-made potato chips, you will never want to open a bag again.  Unfortunately, a lot of food that is really, really bad for you is really, really easy to cook.  I am completely behind rule #63, though, which is “Cook.”  We are getting fat on stuff we’d never put in our mouths if it wasn’t handed to us in disguise.

The one that really bugged me was clearly there to be clever.  At least I hope so.  “If it came from a plant, eat it; if it was made in a plant, don’t.”  Can’t it be both?  A lot of canned and frozen vegetables are processed in plants, but they often retain more vitamins than fresh vegetables because they were left on the vine or tree longer and then harvested just before cooking or freezing (often within 24 hours– that head of spinach in your grocery store was on a truck longer than that).  And I am not going to buy cacao beans and render my own chocolate.  And if Mr. Pollan expects me to give up chocolate, we are going to have a problem.

But I’m with him on many things, like “Pay more, eat less” which has something in common with my “Eat like a Millionaire”plan.  Pollan believes, as do most foodies, that American food businesses have been so busy trying to make food cheaper that they have sacrificed both taste and nutritive value.  I’m lucky enough to live in a place where I can buy Prime organic beef (and right across the street) if I want to; not everybody can.  On the other hand, not everyone can afford to pay three times as much for organic bananas, especially when you’re going to peel them.

As with so many good intentions, Pollan’s rules ultimately run afoul of most people’s real lives.  How nice if we could all shop at nearby farmers’ markets and sit down with our families at a table for every meal.  Mr. Pollan was raised on Long Island, and now lives with his family in the San Francisco Bay area.  His wife is an artist, and they both work from home.  I’ve been in the situation of working at an office all day and coming home not to rest, but to start my second job caring for my home and family.  I will never criticize a working Mom who makes the occasional stop at Burger Sovereign or Pizza Palace in order to have five minutes to herself when she gets home.  Happily, there are increasingly available quality frozen meals that may have the odd long-winded ingredient in them, but that are orders of magnitude improvements over fast food.  Not all processed food is poison, and I wish Mr. Pollan had included “Read labels and become a smart consumer” in his rules.

Many reviewers have pointed out that a lot of the rules are common sense, and they are, but sadly, common sense isn’t all that common.  Most everybody who can walk and chew gum at the same time knows that to lose weight you need to eat less and exercise more, yet millions of diet books are sold every year.  Clearly many of us need a conscience to keep preaching common sense into our ear, especially when we’re passing a Krispy Kreme store, and that’s just what Pollan’s Rules are meant to do.  The last rule is, “Break the rules once in a while,” by which Pollan acknowledges that if Jiminy Cricket doesn’t shut up occasionally, he’s going to get squashed.  It’s worth a look; I recommend the slimmer, cheaper edition that fits in your purse.  Consider getting a few as stocking stuffers for friends and family who need a little nudge to get out of the fast-food habit.

And Now, For the Advanced Students… 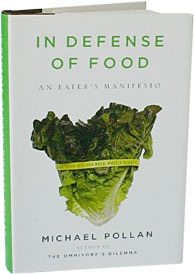 If you want a little more explanation of Pollan’s views and you aren’t afraid of a book with more paragraphs than slogans, you might prefer Pollan’s previous work In Defense of Food: An Eater’s Manifesto (Penguin, April 2009).  This book covers much of the same ground as the Rules, so if you get this one, you don’t really need the shorter work.  Pollan opens the book with his manifesto’s mission statement, “Eat food.  Not too much.  Mostly plants.”  Of course, he then goes on for 256 pages to explain to you what he means by each of those words, none of which are as obvious as they seem.

I agree with a lot of what Pollan has to say; in fact, my husband commented that a section “sounded like me,” probably because of Pollan’s use of the term “edible foodlike substance” to avoid calling overly-processed comestibles “food.”  Personally, I think Pringle’s are one of the signs of the Apocalypse, and not only do I not allow them in my house, I will not dignify them by calling them potato chips (which I love– see above).  I refer to them as “dehydrated reconstituted chopped, pressed, and formed processed potato food product,” for they deserve no better.  But I have spent some time in food processing businesses, and I simply don’t have the fear of them that Mr. Pollan seems to have.  I have neither the time nor the inclination to grow all my own food, and I’m happy to pay someone else to do it.  Often, I’m happy to pay a little more to someone who does it especially well.

Pollan’s 2006 work, The Omnivore’s Dilemma, is best avoided.  Pollan really sets out to forward his vegetarian agenda and, I believe, unfairly characterizes much of the food industry.  Having begun my collegiate career looking to study veterinary medicine, I have a fair bit of experience with animal processing and slaughter facilities, and all I can say is that Pollan clearly went to different slaughter facilities than I did.  Pollan actually released a “Young Reader’s Edition” of Dilemma, and trust me when I say that if you give this book to your children, they may never eat again.  Stick to the “Food” titles unless you’re committed to giving up life as you know it and moving to a commune.  This omnivore will be here tucking into my steak.