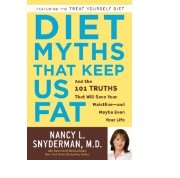 One of the things I wanted to do with 2 Rich 2 Thin was address the incredible volume of misinformation and outright untruths repeated again and again by weight-loss pundits.  Well, yippy skippy, now I don’t have to, because Dr. Nancy Snyderman has done it for me, and since she has a medical degree, and gets paid by NBC News to keep abreast of the latest medical research, she has chops I just can’t bring to the table.

Nancy Snyderman’s Diet Myths That Keep Us Fat (Crown Archetype, May 2009) is exactly what it says on the cover, an explosion of much of the “conventional wisdom” surrounding weight loss.  From “everything you eat after 8pm turns to fat” to “muscle weighs more than fat” (yeah, that one really depressed me), Snyderman addresses commonly-held beliefs that simply aren’t true, sharing the current science as well as her own experience and that of her patients.  She doesn’t just tell you, she proves it to you.

I felt while reading this book that in many places it said exactly what I wanted to say.  A doctor who says you can have a hot fudge sundae for dinner!  She even makes the genes/jeans pun.  You’ll probably find, as I did, that you’re convinced well before she runs out of science, so feel free to skip to the next header if the medical facts start to make your eyes glaze over.  Most of it is fairly plain language, though, so you shouldn’t get so bogged down you want to stop.

Of course, as a doctor, she spends a lot of time focusing on obesity-related health issues.  If it has been awhile since you’ve seen a doctor, try to pay attention to the scary stuff.  The one thing that always worries me about offering ideas and recipes on this website is that I don’t know your health history.  I don’t want to recommend something to you that’s loaded with sodium (sadly, salt makes most everything taste better) if you’re an undiagnosed sodium-sensitive hypertension sufferer.  Reading this book will in no way replace seeing a doctor, but it might give you an idea of where to start the conversation with your own doctor.  Go in with a list of questions– that always makes them nervous.

All in all, I have to say, it’s two thumbs up from me on this book.  You’ll learn a lot, and a lot of it will look familiar after you’ve been around this site.  So why should you read my website when you can buy this book?  I’m way funnier.