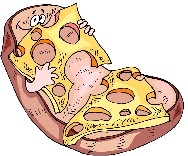 Depending on whether you believe the flattering biography of John Montagu, Fourth Earl of Sandwich, or the unflattering one, the first meat-between-two-bread-slices handy meal was served to the Earl either at his desk (because he was so devoted to his many public offices) or at the card table (because he was a compulsive gambler).  Whichever one it was, it’s a good bet that he was paying little or no attention to what he was eating, merely that he was eating.  No wonder he achieved such an impressive girth later in life.

Sandwiches have become a way of life for most of us, because they are convenient and reasonably tasty, but the whole idea of having a meal in one hand while your other hand is typing, or on the wheel of your car, or holding a telephone, is disastrous to your diet.  In the first place, you’re probably not paying enough attention to it to be enjoying it, even if it is a good sandwich (so why are you eating it?).  In the second place, the guts of the sandwich, which is presumably the feature flavor and chief nutritive element, is likely being smothered under all that bread.

Consider the open-face sandwich.  It’s really just a meal-sized canapé, a cracker-with-cheese supersized.  But you don’t normally feel the need to slap another cracker on top of your cheese or other canapé topping (and it wouldn’t be nearly as pretty), yet we compulsively put a second slice of bread on top of our carefully prepared sandwich filling, usually for no other reason than that we can eat it faster without getting our hands ooky.  With one swift movement, we have increased the calories and glycemic index of our meal while making it possible to consume it so quickly that we don’t realize what we’re doing.  Bad idea.

One of my favorite guilty food pleasures is the Jack-in-the-Box Supreme Croissant.  It’s a fat pill.  I know it.  That’s why I don’t have one often, but sometimes I just need that fried breakfast goodness.  I got one the other day, and for a wonder, I actually took my own advice– I took the first bite, and really considered what I found so delicious.  And suddenly, I realized that there was too much bread.  I was getting a tantalizing hint of the filling flavors, then they were mercilessly swallowed up by the starch.  So I took off the bottom of the croissant (the cheese is melted onto the top, but the egg is placed on the bottom with nothing in between, so it’s fairly mess-free to remove), and took another bite.  Heaven.  There was the smooth egg, the crispy bacon, smoky ham, and just enough cheesy croissant to be a complement without overpowering.  So there was 80 or so calories that I didn’t need to eat, and I actually enjoyed what was left more.

In recent years, the “wrap” has become a popular alternative to the bread sandwich.  Unfortunately, the calorie count of the average tortilla equals or exceeds the average bun (there’s a lot less air, but the same amount of flour).  You’re better off with one slice of bread or half a bun than you are with a tortilla.  And honestly, it’s no tougher to eat an open-faced sandwich than a slice of pizza, and most people manage that just fine (I do not come from a part of the country where they fold their pizza).  Of course, it does mean that you can’t pile your sandwich innards sky-high like Dagwood Bumstead, but that’s also a benefit to your waistline.  If you wouldn’t put an inch-thick stack of cold cuts into your mouth by itself, why does it become okay to do it between two slices of bread?  Go back to canapé thinking, and don’t put so much stuff on your bread that it’s in danger of collapse.

I’ll make an exception for subs if you eat them like I do, namely, like it’s a salad that happens to be lying on some cold cuts and a roll.  But for all other sandwiches, give them a try open-face.  You may find that you can eliminate some non-value-added calories from your plate, and enjoy what’s left more.  Yes, it will probably take a little longer, and yes, you’ll probably have to wash your hands.  But this is supposed to be a meal we’re talking about, and any time you consume a meal’s worth of calories, it deserves a little more ceremony than being crammed in your face at a stoplight.