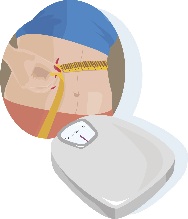 So, here we sit in the aftermath of our annual festival of gluttony, dreading getting on that bathroom scale.  That’s okay.  Never weigh yourself over the Thanksgiving weekend.  If you did commit an atrocity against your diet, there’s every possibility that you woke up the next day feeling bloated and awful to the point where you ate sparingly, if at all.  You probably also spent Thanksgiving sitting for long periods at the table, and later on the couch for conversation or football, so you woke up the next day with your body screaming at you to get out and move it.  Bodies are smart.  If only we listened to them more.

I was talking last night to a friend who has struggled with his weight over the past few years, but now has it under control.  We were discussing where our “line in the sand” is, namely, the weight that tells us it is time to stop eating and get our sorry butt some exercise until the scale shows us a lower number.  He said he weighs himself every day, sometimes more than once per day, to make sure he doesn’t cross the line.  I wished him a pleasant journey on his one-way trip to Neurosis City.

The Line You Won’t Cross

I absolutely believe we should all have a line in the sand.  For me, it’s my post-baby weight, which is the most I’ve ever weighed without having another person inside me.  When the number on the scale gets too close to the LITS number, it’s salads, cottage cheese, and daily exercise until that number drops by five pounds, then light-normal eating, yogurt for dessert, and every-other-day exercise until it drops by another five pounds.  If it went on fast, it will probably come off fast, because your body hasn’t yet had a chance to deposit those extra calories in long-term fat storage, so if you limit your intake and increase your energy requirements, your body should happily burn off that stuffing and pie.  The longer you put it off, the longer it will take to lose, because once you’ve added fat cells, your body really doesn’t want to let go without extraordinary efforts.

It’s (she says again) like your credit card debt.  Pay it off before the end of the month, and it’s a free one-payday advance; wait until January, and there’s interest added.  If you wait until after the holidays and make getting the weight off your New Year’s resolution, it could take twice as long as it would have if you’d just eaten sparingly during the week for the first couple weeks of December (you can wait until the leftovers are gone, but then, it’s time for the austerity plan).  And unless you live in a ski resort town (or Australia), January is already going to be miserable enough without having to live on lettuce and rice cakes while frowning at the bad weather.

What I don’t advise is weighing yourself daily.  We have eating patterns, and they pretty much follow our normal weekly schedule.  I know that I am more likely to go out with friends or make special meals for my family on the weekend, then eat lightly during the week.  So I weigh myself on Friday morning.  I doubtless took in extra calories over the past weekend, but fewer during the past week, so by Friday I’ve compensated for the previous weekend’s overages.  If you have to take clients to lunch during the week, but you go hiking on the weekends, you’ll have the opposite schedule; weigh yourself Monday morning, and you’ll know if the extra calories you burned over the weekend made up for the two-martini lunches the previous week.

If you weighed yourself every waking hour of every day for a week, you’d be astounded at how much your weight fluctuates based on when you go to the bathroom, how hydrated you are, whether you’ve been active or sedentary, and a host of other factors.  And that’s not even talking about the joy and wonder of what time of the month it is.  So I may step on the scale just because it’s there during the week, but the only number I pay attention to is the Friday morning number (but not this week!).  I know my weight can vary by several pounds and still not mean a thing, so panicking over “where did those two pounds come from?” is pointless.

I also have another LITS number– my waist measurement.  The negative impact on your health of carrying weight around your middle is pretty well established, so once a month, I check the tale of the tape.  The scientific data shows the general LITS number for women as 35 inches, but when mine hits 34, I know I’ve been sitting too long and it’s time to shake my booty along with everything else.  If you’re currently on a weight-loss program, you should absolutely be tracking your waist measurement as well as your weight, because often when you hit a weight plateau, your body is still making positive changes.  My husband has been working to get some weight off and reduce his “love handles,” and every time he starts to get discouraged because he hasn’t lost any weight for a couple of weeks, we’ll measure his waist and it will be another inch down.  He’s only lost about ten pounds since August, but he’s taken over four inches off his waist (and his blood test numbers have improved significantly).

Knowledge is power.  But it has to be meaningful knowledge, otherwise it’s just noise.  If you try to react to every little weight shift, you’ll make yourself crazy and accomplish nothing.  On the other hand, if you don’t establish some benchmark of where you should be (or where you want to be), you’ll go too long before you notice that your clothes don’t fit, and your road back (or forward) will be harder than it needs to be.  Pick up a good digital scale (so you can’t pretend to misread the dial) and a tape measure.  If you’re trying to lose rather than maintain, jot your numbers down on a calendar so you can track your progress.  Otherwise, know your LITS numbers and check in on them regularly, on a schedule that reflects your normal routine.  And act when the numbers tell you to act, not at some promised future date, or you’ll find that the line in the sand is so far down the beach behind you that you can’t even see it anymore.