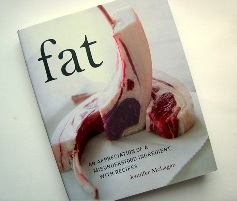 I won’t keep you in suspense– I LOVE this book.  I’m a bit squeamish about some of the recipes (if I tried to serve jiggling bone marrow to my husband, he’d just look hurt and wonder what he’d done to make me angry), but I love her no-nonsense approach to the defense of the foodstuff that has been keeping our species alive for millenia.

In Fat: An Appreciation of a Misunderstood Ingredient, with Recipes (Ten Speed Press, September, 2008… and okay, brevity is not the soul of book titles these days), Jennifer McLagan unapologetically lambasts the low-fat movement.  Pointing out that our fear of putting fat in our bodies has nonetheless caused us to put historically unprecedented amounts of it on our bodies, McLagan calls for a return of fat to our kitchens and our plates.  In fact, she champions a number of fats that I don’t think will really make significant inroads into the American palate; I believe butter should be its own food group, but I will not be spreading pure lard on my bread anytime soon, rosemary-infused or not.

A Quiet Rebuttal to Loud Propaganda

After reading a bit of the book, I looked carefully at McLagan’s bio and found that her college degree is in Economics, and I don’t mean Home Economics.  I mean that little-understood discipline full of unemotional people who routinely challenge our assumptions and slaughter our sacred cows armed with the twin blades of logic and statistics.  Using the same mind set that led Steven Levitt and Stephen Dubner (in the fabulous Freakonomics) to tell parents that it’s much safer to send your kids to play at a house where the owners have guns than it is to send them to play at a house with a swimming pool, McLagan calmly explains that no matter how loudly the anti-fat activists shout, the data still proves them wrong.  Our forebears frequently managed to live long, healthy, normal-weight lives while frying things in bacon fat, so there’s no reason to suppose that we can’t do the same.  (My grandmother’s diet consisted mostly of white bread, butter, beef BBQ, and pie, and she lived to be 95.)

McLagan starts out with a tiny bit of science, and I am ashamed to say that even with a background in science, I could not have told you why an Omega-3 fatty acid was called that.  Now I can.  (Not telling.  You’ll have to read it yourself.  It’s only a paragraph.)  She explains just enough about fat types to give you a basis for understanding why animal fat is not evil.  She delivers some hard truths about the role fat plays in giving food flavor, and why it is so satisfying to our taste buds.  And yes, you will get hungry reading this book.  Have some crusty bread and good butter at the ready.

Everything’s Better With Bacon and Butter

An Australian by birth (I have to think pretty hard before taking culinary advice from someone who can stand to eat Vegemite), and trained in classic French cooking, McLagan does recommend a lot of food items that I quite frankly find scary.  But there are plenty of American-accessible recipes here as well, starting with making your own Homemade Butter.  The whole butter chapter (subtitled “Worth It”) made me smile.  Though I think even I draw the line at agreeing with the blanket statement, “Butter is actually good for us,” (because of the fat-soluble vitamins and minerals it contains, pg. 15) I was glad to be reminded that more than one third of the fat in butter is monounsaturated.  The chapter on pork fat will be cheered by bacon lovers everywhere, and trust me, you really want to try the Bacon Spice Cookies.  Really.  And I wish I had read the chapter on poultry fat before I threw away the turkey fat I skimmed off the drippings from the Thanksgiving bird when I made gravy.  Sigh.  Live and learn.

Will eating fat make you fat?  Well, it depends on how much you eat.  Fat has more than twice the calories per gram as protein or carbohydrates (9 calories per gram versus 4).  On the other hand, as I mentioned in Juicing Your Java, fat is so satisfying to our mouths that when you take out the fat, you often have to replace it with more than double the carbs, so what are you saving?  Eating too much of anything is going to make you fat.  A little of something fabulous and satisfying can help you avoid a lot of something starchy and dull.  So check out McLagan’s Fat, and pardon me while I go butter something.  And may the Blessed Haseka keep your butter as fresh as the day it was churned.